I’ve felt like that for a while. Maybe it’s with everything that has been going on, but I’ve found it hard to post anything on my blog or write stuff. When I have written stuff that I think might be good as a blog post, I’ve ended up not posting it. I try to challenge myself to write and publish at least two blog posts in a week. Most of the time, I can’t even come up with a paragraph of anything that I feel I could publish.

Writing used to be fun for me. I still like it, but I don’t enjoy it as much as I used to. Maybe it’s because I am trying to force myself to post something rather than let it emerge out of my brain and onto paper or a computer screen. In fact, there’s a lot of stuff I don’t feel as much enthusiasm for as I used to. Maybe it’s a sign that I’m getting old, or that I’m just stuck in a hole of misery and disappointment that I’m finding mega difficult to get out of.

Like in the advert for Virgin Red, I once dreamt that I blew a bubblegum bubble so big that I floated away.

That dream turned into a nightmare when a bird accidentally flew into it, popped it, and sent me falling. And then I woke up.

It did nothing to help ease my fear of heights, that’s for sure.

I am reminded that it’s coming up to NaNoWriMo time again. I still get the emails about it a few years on from my first (and only) attempt at it. I’ve thought about trying again some time, but as each year passes I just feel more and more like I don’t have the energy or time to really make a go of it.

That doesn’t mean that I am totally against the idea of month long writing challenges. Indeed, I’ve taken on my own alternative in the past. November has seen me post a blog every day instead. Doing that every day felt a lot easier to me than writing novel chapters, even if I did run out of things to blog about near the end of the month. I didn’t do it last year and I am unsure as to whether I’ll do it this year, unless I can guarantee that at least 60 percent of them are not going to made up of me moaning that I have nothing to write about. 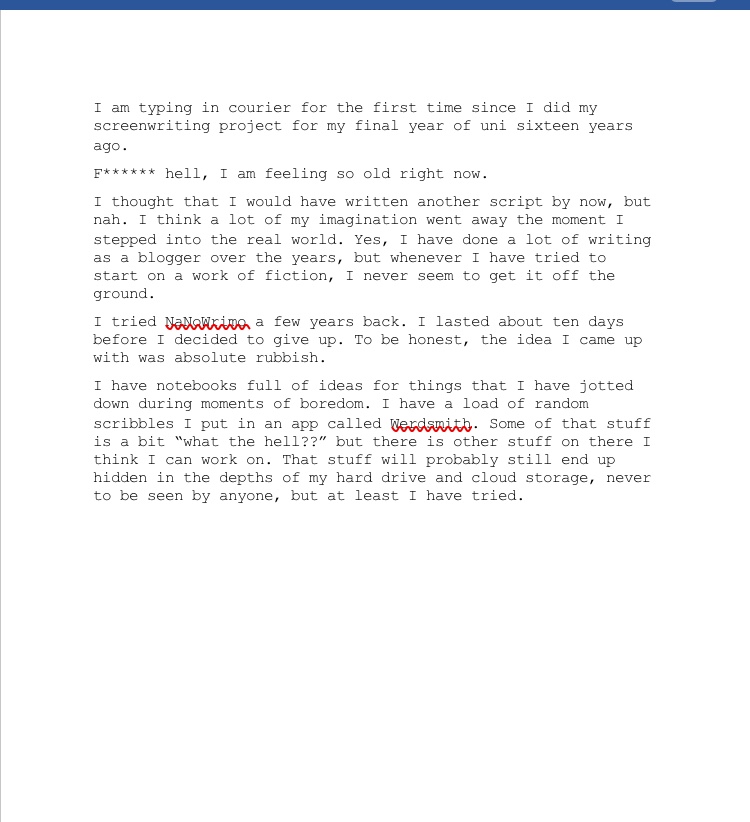 Every now and again, you may find yourself, in a random moment, thinking to yourself, “WHAT THE F*** IS WRONG WITH YOU?”

I’ve had many a moment recently where I’ve been thinking this about myself. And I still don’t know the answer. I am, however, able to identify the possible ones. Like a multiple choice question, that would probably comprise of about eight options. I will update this when I find out.

I hope you have a good and peaceful one. Try not to get into any arguments at the dinner table and maybe stay off social media if you’re recording any TV.

Get a Smart car (after I’ve passed my driving test, obvs).

Get my own house. I know it’s an extremely long shot but I hope to be able to afford one at some point.

Become a published writer (and like, totally earn money for said writing).

Go to the Edinburgh festival. I used to go on holiday to Scotland nearly every year during my kid and teen years and it was nearly always when the festival was on. Nearest we got to it was watching stuff on it on BBC2 (we were staying up in the Highlands).

Go back into studying, even if it’s just for a short course.

Attempt NaNoWriMo again and actually complete it this time (or maybe just get further than I did the last time I attempted it).

This post will be edited as and when I complete certain things and/or think of new things I want to do before I hit the milestone.