Say what you will, but I love the Olympic and Paralympic mascots, Wenlock and Mandeville. So much so, that when I saw toys of them available on a well known website at reasonable prices, I decided to get them.

The little “cuddly collectable” Wenlock was the cheapest version of him available at the time. It later turned out that I paid more for him than I did for the standard sized Mandeville, that I only bought the other day. Still I got them both for under £15 altogether, which is decent for official merch for an event like this one.

Yeah they get stick, and maybe I’m a bit old to be having cuddly mascots, but I don’t care. Haters gonna hate, etc, etc. 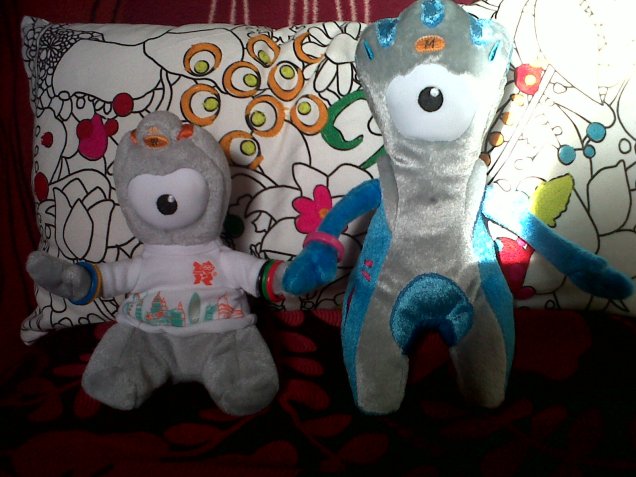 The 2012 Olympic and Paralympic mascots were unveiled today. Wenlock and Mandeville are probably best described as two little steel monsters, looking like something out of children’s favourite Yo Gabba Gabba.

I admit, when I first saw them on TV I thought they were a bit weird.  “Why couldn’t we have an animal, like a lion or something?”, I thought. But after going on to the website and watching the short cartoon, I warmed to them.  They’ve quite obviously been designed to appeal to children – children’s laureate Michael Morpurgo was involved in their creation and wrote the story for the cartoon.  Some thought and imagination seems to have gone into them as well – from their names to their appearance.  Wenlock is named after Much Wenlock, the Shropshire village that staged the games that inspired the modern Olympics, while Mandeville is named after Stoke Mandeville in Buckinghamshire, the birthplace of the Paralympics.  Their eyes (or rather, their eye) is a camera lens and they have a yellow light on their head (a reference to London Taxis). Wenlock has three points on his head that represent the podium and has the Olympic rings on his wrist as “friendship rings”. Mandeville has the curves of the Paralympic logo on his head and aerodynamic arms and tail.

As expected, lots of people online were giving their opinion on the characters the moment  they were unveiled. Also as expected, a large number of them weren’t exactly positive. But give them a chance and I’m sure we will all grow to love them by the time the games come around. And let’s face it, they are better than the 2012 Olympic logo.

Find out more about the Olympic mascots here

Previously on this blog…

Stuff I blog about

My Day Is Booked

A daily selection of the best content published on WordPress, collected for you by humans who love to read.

Im ashamed to die until i have won some victory for humanity.

Domenic Garisto / LIFE IS NOT A REHERSAL,SO LIVE IT..if you can't be the poet, be the poem..havau22.com

I dont have the answers, just a lot of questions.

Life under the thinking tree

One Chance to See the World
Bournemouth Girl

Planning the life you want

Welcome to my world.

Showcasing the best of European Films and Scripts at the FEEDBACK Festivals!

from passion to page

life ramblings of a 20 something.

Lions can wear glasses too